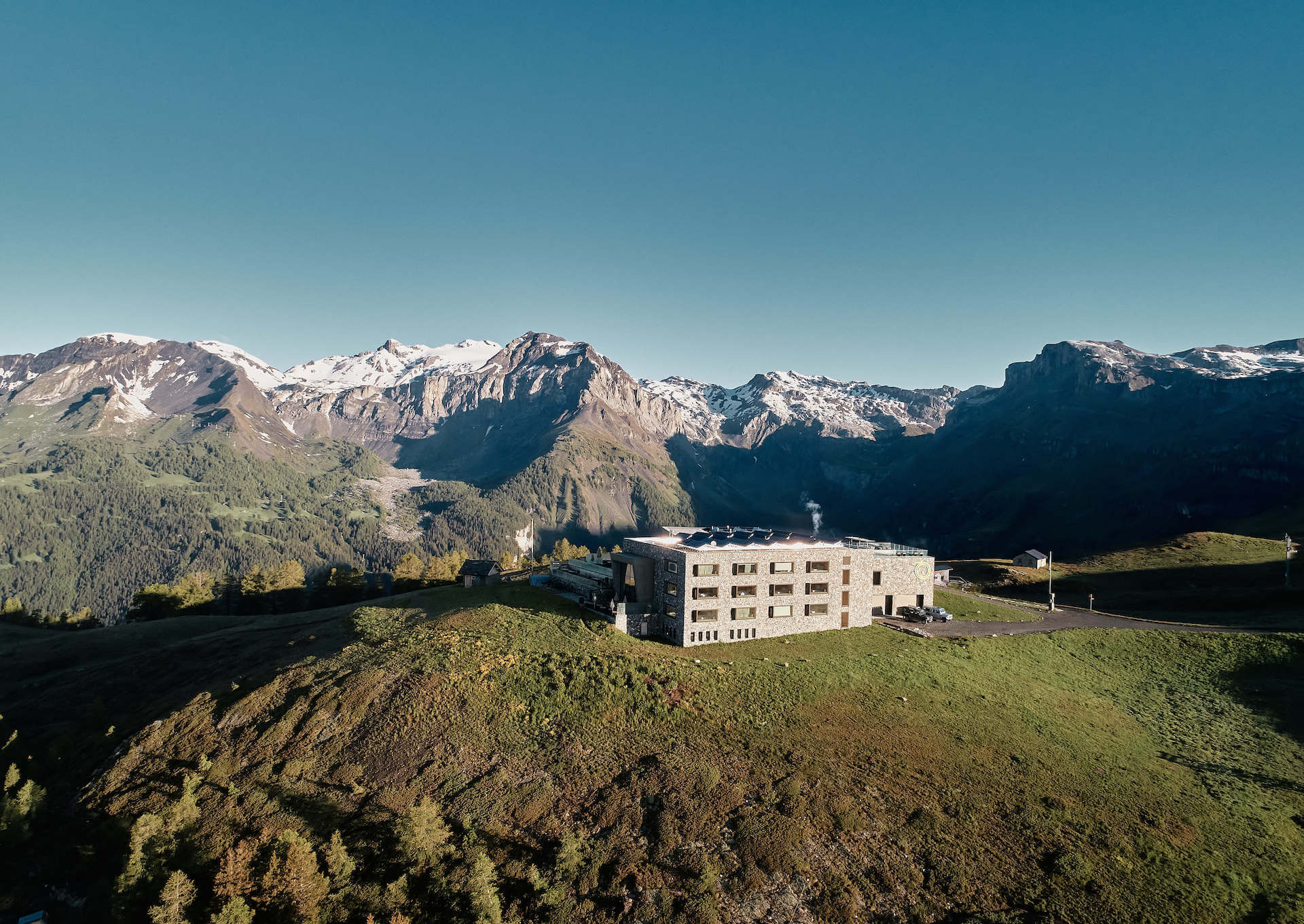 due to its construction, energy use and proximity to its suppliers, chetzeronis environmentally friendly and responds to a process of sustainability. this process began at the genesis of the project since the idea of rehabilitating a disused building is in itself already a commitment. re-appropriating an industrial vestige to make it a place to live in communion with nature is a commitment.

the materials used in the construction have been carefully and consciously chosen. first of all, the stone that envelops the building was recovered from a ski slope less than three kilometres from chetzeron. it is therefore no less than 1400 m2 of stones that have been reused. then wild oak from just the other side of the mountain, i.e. from the Bernese Oberland, was chosen. for the thermal insulation of the building, a durable material consisting of glass cells was used, the foamglass. the bedding comes from the hüsler nest company, which is certified by the eco institute. finally, the furniture was entirely designed by the partners with the help of Valaisan craftsmen, thus keeping the local business running.

thanks to its insulation, natural ventilation system and heat production, chetzeron has obtained the swiss label minergie-p in 2015. « The Minergie-P label qualifies buildings with very low energy consumption, offering the highest level of comfort and energy efficiency. » the first result is 23 cm of glass wool insulation between the building wall and the exterior stone cladding, which allows the structure to drastically reduce its energy consumption and even store the sun’s heat. in addition, the many chetzeron windows and bay windows all have triple glazing, which further optimises the insulation of the building. in winter, thanks to this extremely efficient insulation, the ventilation system recovers calories which are then reinjected into the building. in summer, the same system is used to cool the building.

to produce heat, chetzeron has a pellet boiler of 50 m2 thermal solar panels and a heat recovery system for the refrigeration and freezing plant. the pellet boiler, which generates 80% of the thermal energy needed by the building and the outdoor swimming pool, is considered 100% renewable. pellets are local wood pellets produced from sawdust and wood shavings in particular. in this way, they enable the full potential of our Swiss and Valais forests to be exploited and avoid the transport and input of polluting fuel into a natural environment. chetzeron is supplied by valpelletswhich is based in uvrier in the canton of valais.

the water used by chetzeron is pumped from the chermignon accumulation lake which is itself fed by the tseuzier dam. thanks to the snow-making facilities of the Crans-Montana lifts, water rises all the way up to the hotel. there was therefore no damage to the environment during the work. only the 700 m tanks3 were refurbished and a drinking water treatment plant was installed on site. this infrastructure now makes it possible to supply the establishment on a continuous basis.

finally, the founding partners wanted local artisans to carry out the work to avoid unnecessary transportation and to involve local businesses in this beautiful project. the woodwork was therefore, for example, carried out by several craftsmen from the upper and central Valais. only very specific works such as the installation of the huge bay window have solicited companies from outside the canton.

throughout the entire process, the desire to protect the environment, to reduce our ecological footprint and our C02 emissions as much as possible was present. today, this desire is reflected in the choice of our suppliers, in the dishes we offer, in our culinary world and by our internal processes which aim to respect our planet as best as possible. 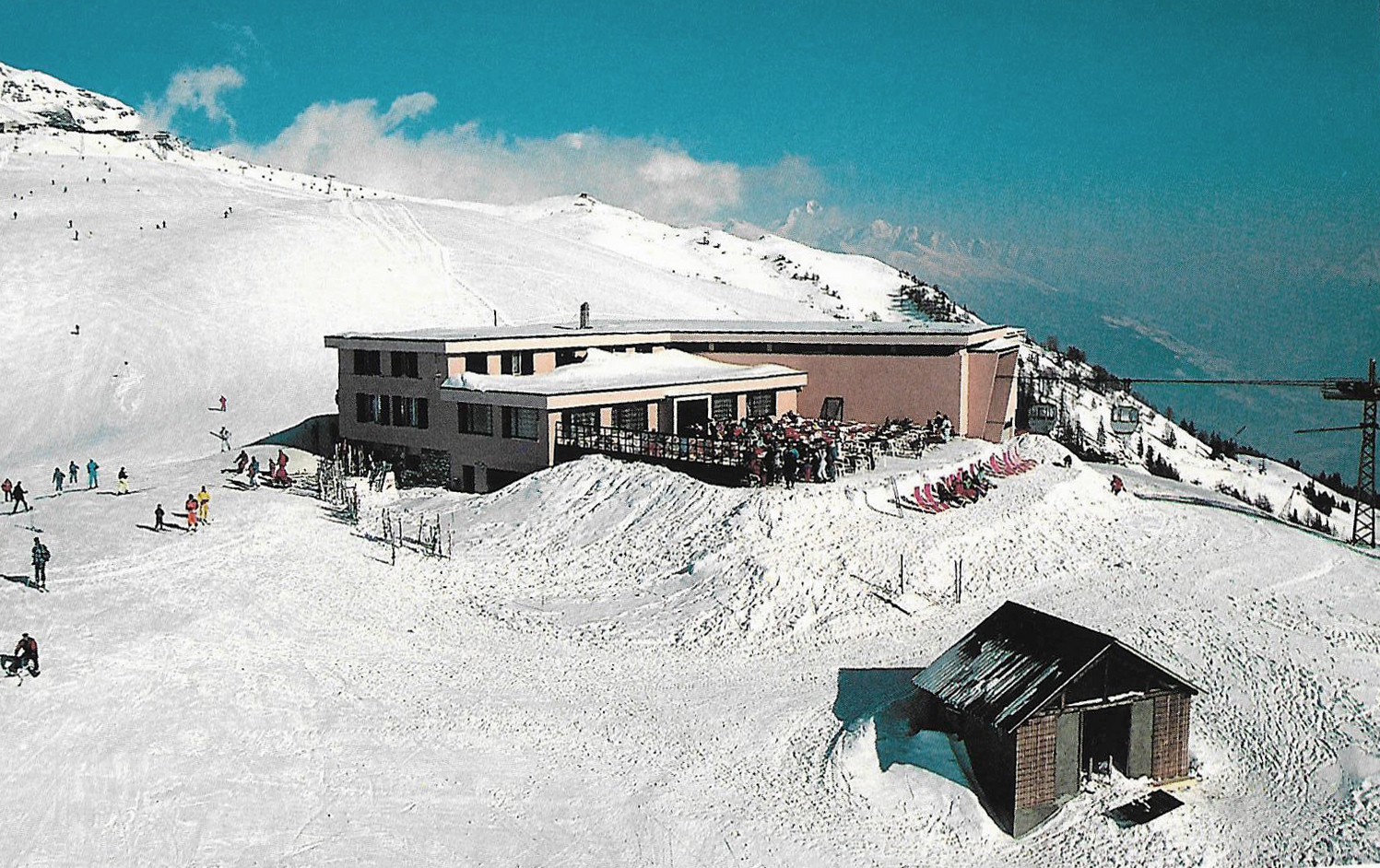 from the gondola arrival station to the design hotel 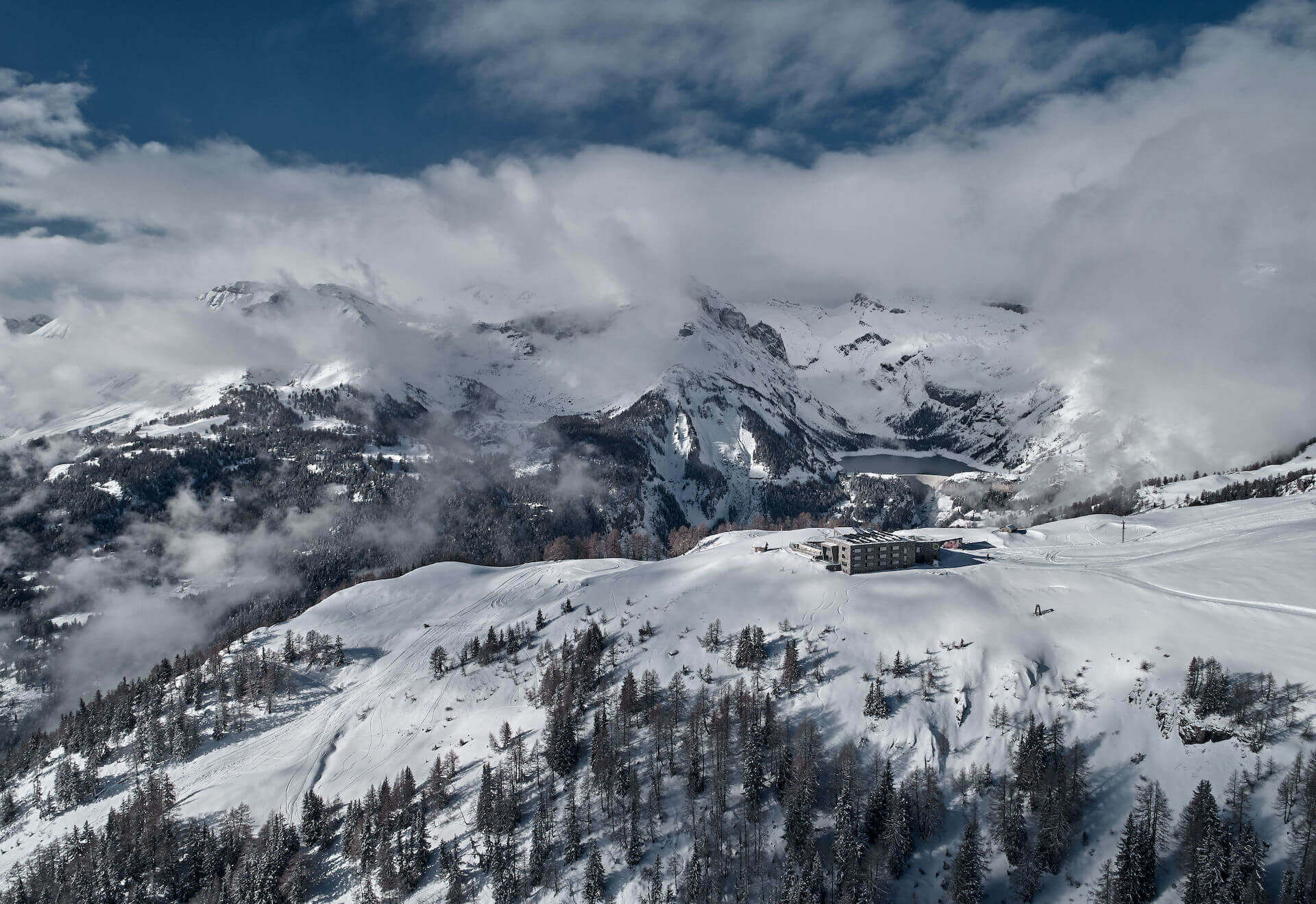 an exceptional location facing the highest peaks of the Alps 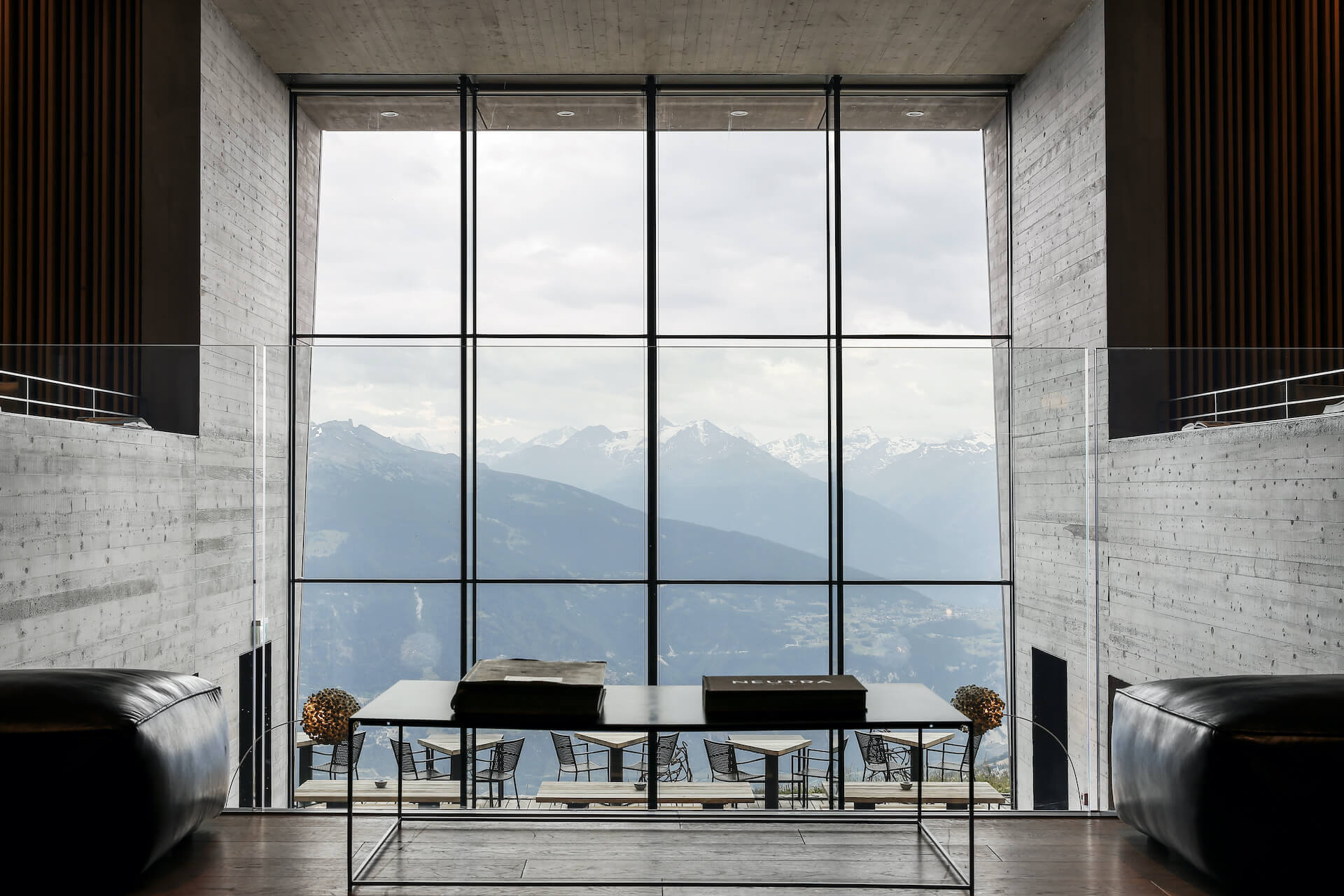 a design inspired by its alpine environment 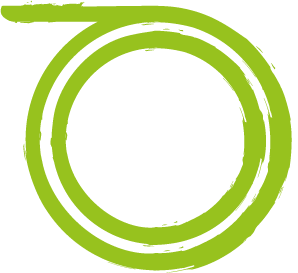 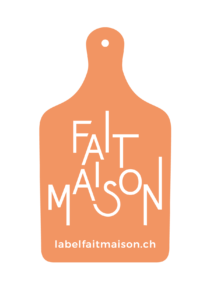 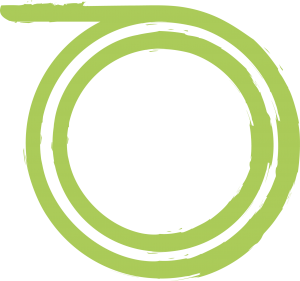 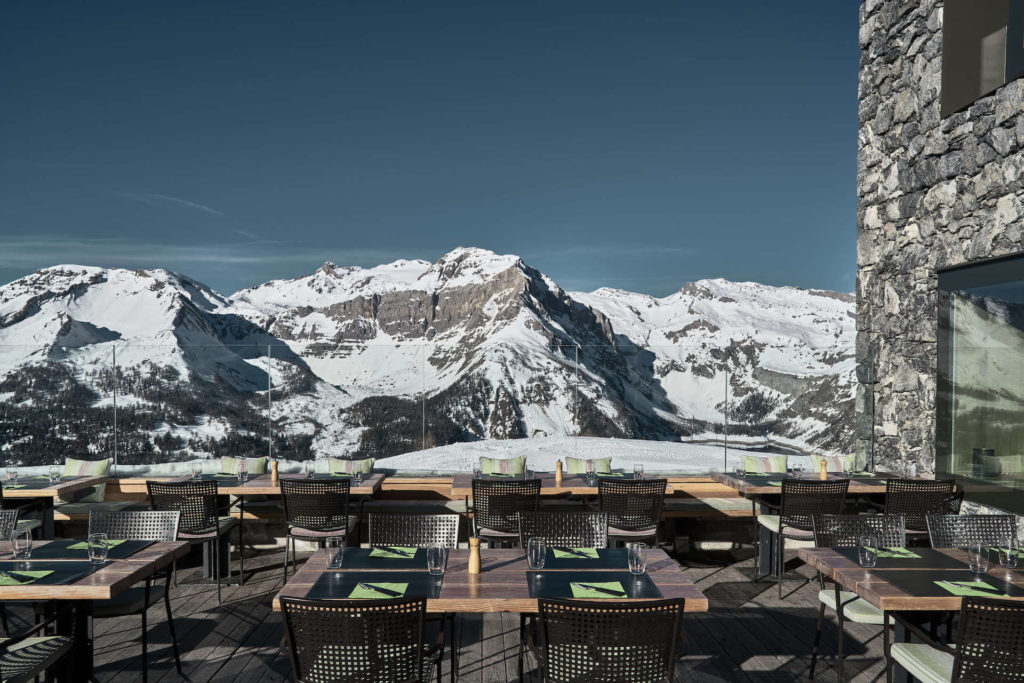 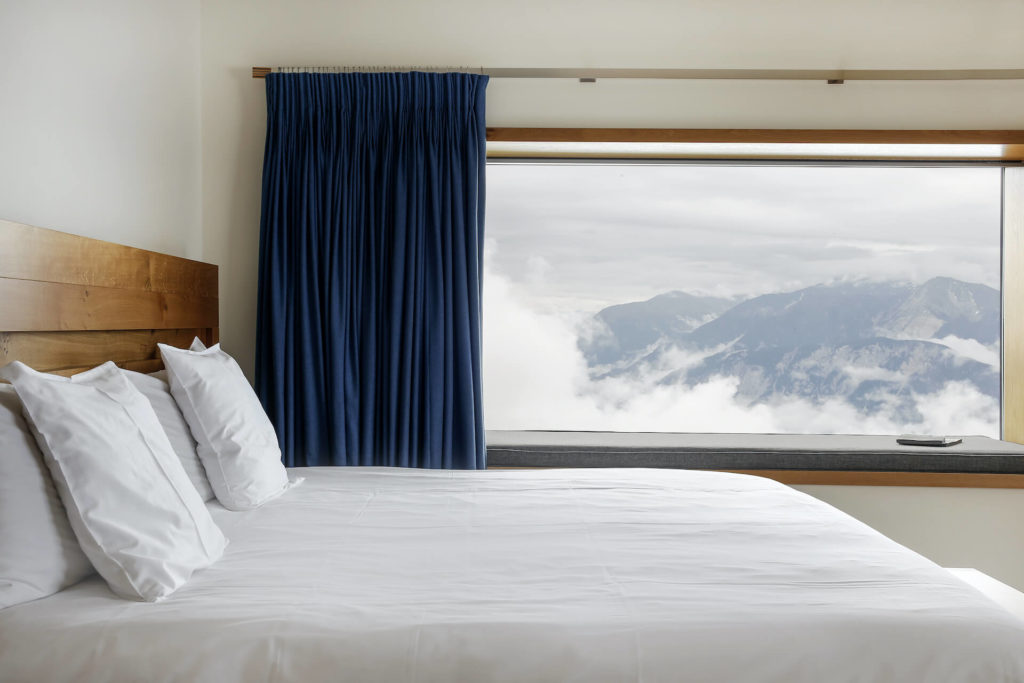